Skip to content
How Our Ears Work
Our ears are responsible for detecting and transmitting sound to the auditory nervous system and have been divided into three different areas - outer, middle and inner. 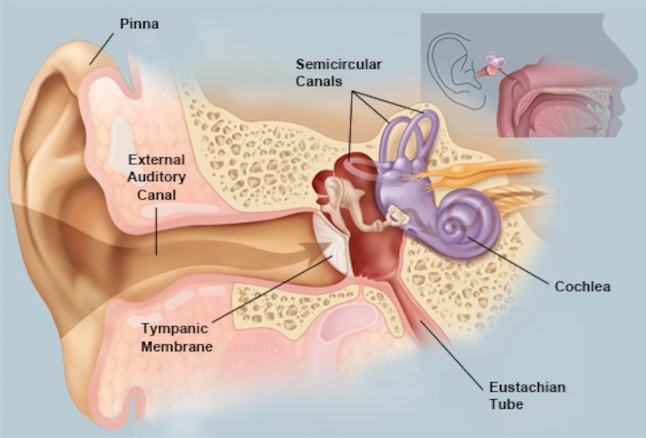 The outer ear consists of the pinna and ear canal.  The pinna collects and directs sound down into the ear canal where it travels to the eardrum.  If there is any blockage – i.e. excess earwax (cerumen), infection of the ear canal, or deformity of either the pinna or ear canal it will reduce or prevent sound from reaching the eardrum.  This is known as a conductive hearing loss.

The middle ear begins at the eardrum and consists of the bones of the middles ear (known as the ossicles) and Eustachian tube.  The middle ear is an air filled space where sound is transmitted through the eardrum and ossicles to the inner ear, being amplified during the process. Build up of fluid, excessive negative pressure, and/or fixation of the small bones in the middle ear also results in a conductive hearing loss.

The Eustachian tube’s main purpose is to ventilate the middle ear, ensuring the middle ear pressure remains at near normal environmental air pressure.  The Eustachian tube also has a secondary purpose, draining any accumulated secretions, infection, or debris from the middle ear space.  When fluid accumulates in this area then the ability of the sound to be transmitted is impaired, resulting in a conductive hearing loss and setting up an environment for possible infection.  If the pressure builds up too much, it can result in the eardrum rupturing.

Children and older adults are more prone to fluid and infections in the middle ear due to anatomical reasons.  The Eustachian tube, in children, is parallel.  Due to this, when fluid collects in the middle ear, it is more difficult for the fluid to drain.  Typically, by the time we reach the age of five the Eustachian tube has matured and is no longer parallel, allowing it to function more effectively.  As we age, the muscles of the Eustachian tube begin to weaken, resulting in it not functioning as effectively.  There are many other factors that do come into play as well – including allergies and sinus issues. The majority of conductive hearing loss can be treated medically.

The third area of the ear is the Inner Ear.  The inner ear resembles a snail and is fluid filled.  The head of the snail is the semicircular canals and responsible for balance.  The bottom area, that resembles the shell, is known as the cochlea.

Ready to book an appointment?